To learn how to grow your own 3D tree, first let’s see how a tree is built up. What exactly is a branch? A branch consists of a series of nodes connected by woody tissue that grows in a cylindrical shape. A node is the point where a leaf grows out. The number of nodes and the length of a new branch depend mainly on light and growth hormones.

The leaf at each node is a small power plant that harvests sunlight and turns it into energy. This energy is used by existing branches to grow thicker, but it is also used to grow buds. These buds grow at the base of each leaf. After the leaves are long gone, most of these buds will survive winter and develop into a side branch in the following year. The node at the end of the branch develops a bud that is oftentimes much stronger than side buds. This node will develop a new segment that will lengthen the existing branch.

These new side branches and end branches are called twigs, they are the fresh new branches that were grown this year. They are very different from the older branches of the tree – they still have leaves, flowers and fruit – and they look and behave just like small individual plants. Also like small plants, many twigs don’t survive the winter, but the ones that do survive will turn into woody branches.

The biggest woody branch that started the whole tree is called the trunk. But it’s important to know that that’s just a name, because the trunk is no different from other branches – each and every branch of a tree is treated equal and acts the same.

Nature has had millions of years to evolve its presets – The Grove humbly tries to capture these iconic growth forms, with a selection of presets that covers a wide range of tree characters. Studying these will soon teach you each parameter’s impact on a tree’s shape. You can save your own presets by clicking the plus icon next to the preset picker. Presets are saved as plain text files that describe all relevant parameters. 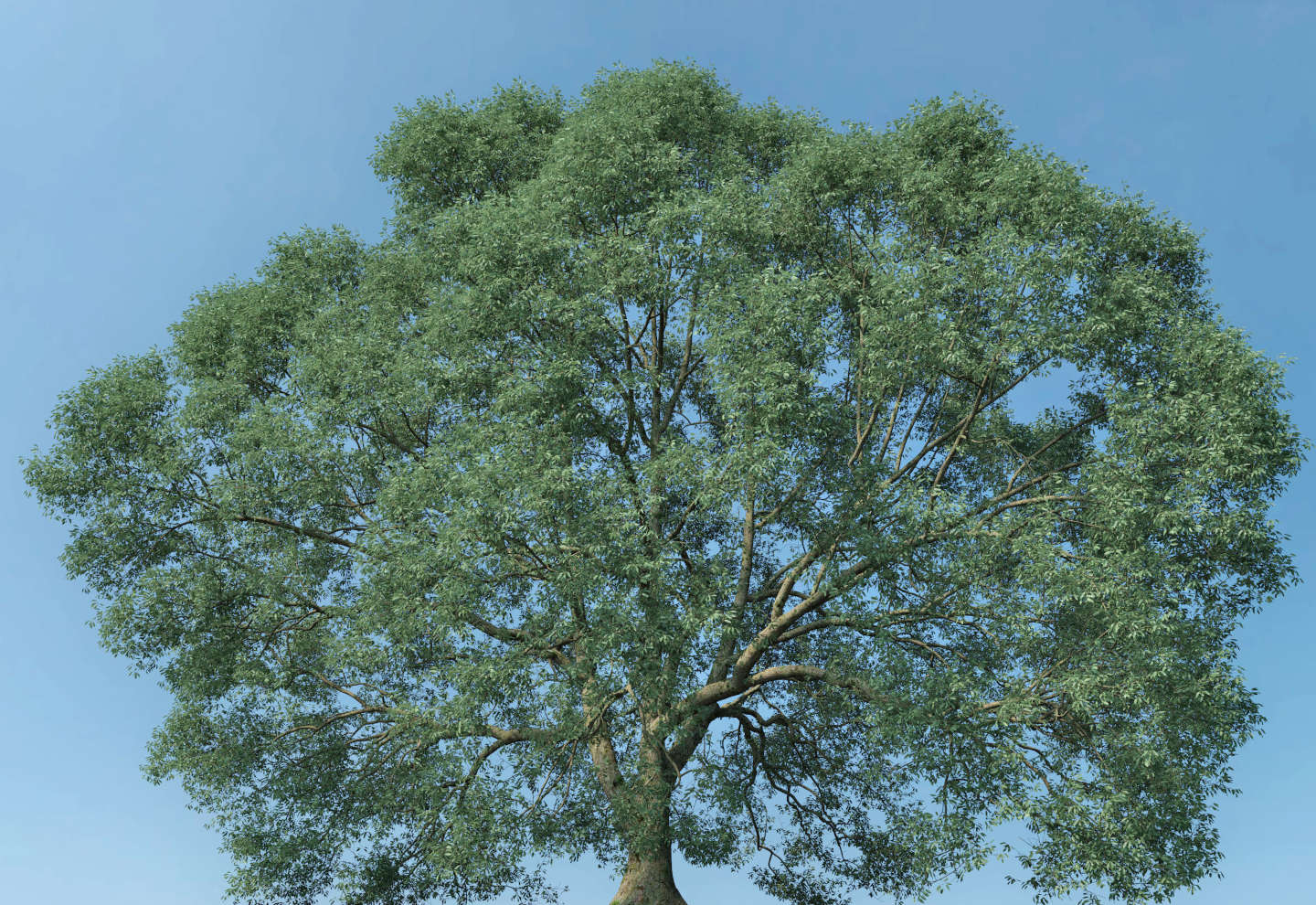 Open up the Add panel and I’ll walk you through its parameters. Every node has a Chance of growing a new side branch. Some buds get damaged by frost or insects, others remain dormant. Next, you can Reduce this chance on less vigorous, mostly shaded branches – another way for a tree to only grow where it matters.

For very strong growers like pine and oak, side branches are mostly added near the end node, which you can control with Only on End. With several strong buds near the end, there’s a chance for the formation of a Fork, a split where two branches grow with equal vigor. Other trees create even more forks because they tend to end their branches with flowers and fruit, like the beautiful magnolia with its distinct structure of branches.

Most buds are created on fresh branches, a chance that is gone once the branches grow thick and woody. But there is still a chance for an old node to grow a spontaneous bud. Some species grow lots of spontaneous buds, especially after heavy pruning. Trees damaged by storm or insects will also fight back and grow extra buds. The Regenerative parameter controls the chance of forming these regenerative branches.

The Add > Side Branches menu allows you to choose how many side branches a node can develop. Most trees grow a single bud at each node, each successive bud alternating sides on the branch. This is what botanists call alternate branching. A small number of trees grow two buds at each node – one at each side – called opposite branching. Trees like Maple, Horse Chestnut and Ash show opposite branching. Depending on the growth power of the branch, a pine tree can create an entire whorl of branches.

When a bud does grow a new twig, it’s at an Angle to its parent branch. This determines the initial direction in which the side branch will grow. This initial direction can also be pulled Up, along with some Random variation. An effect also seen on many trees is that buds are pulled toward the horizontal plane, simulate this with Horizontal.

After the fate of a bud turns out favorable, it pops open to grow a new branch. This branch will grow a length of Grow > Length, divided into Grow > Nodes nodes – that is if the branch has full vigor. Less vigorous branches will grow shorter and with less nodes.

Nature exposes trees to forces like wind, cold and even insects. A branch experiencing these forces rarely grows in a smooth line. So add some realism by randomizing each new node’s direction with the Turn > Random parameter.

Now what makes a tree grow up and its roots grow down? Trees regulate growth with hormone molecules, communicating what to do to different organs. The distribution of hormones determines which parts grow, and which way it grows. Some hormones are free to move by gravity, concentrating at the bottom of branches. By growing more cells on the bottom of a branch, it bends up to the sky.

Botanists call this effect gravitropism. Tropism is a fancy word for bending or turning, while Gravi is short for gravity. I just call it Turn > Up. The effect of gravitropism is partly countered by bending under weight.

The shape a tree evolves into depends a lot on its surroundings. A tree growing in an open field has no competition for light and can grow a wide crown shape. In a grove of trees, however, the inner trees tend to grow higher and much more slender while competing for light and space.

True to its name, the Grove grows groups of trees just as well as a single tree. Watch trees compete for light and form a unified, well balanced crown shape. Grouped trees are often much more appealing and add natural realism.

You can use the Plant tool to grow groups of trees in all kinds of natural and cultivated arrangements. And you can also plant trees at specific locations and even at an angle. Simply add empty objects inside your current grove collection with Add > Empty > Single Arrow. Then restart or regrow your grove to plant the trees and start growing. Add as many trees as you like and start growing groves of trees!

Need to create a hero tree with total control? Sculpt your own trunk and main branches. Then distribute the empty objects where you want to finish off the tree with simulated branches.

The Grove has a strong eye on realism. Simply let nature take its course and watch your trees unfold before your eyes. The Grove does all the heavy lifting. Following the rules of nature makes for a predictable and surprisingly easy experience. Despite the complex algorithms under the hood, the Grove is a joy to work with.

Should you need them, you can use the manual prune tool, the draw tool and the bend tool artistic control. You can also shape a tree with a react object. Learn more about react objects at React.

A recent study by Yale University estimates there are a total of 3 trillion trees – 420 trees to every person – on earth. They surround us everywhere. We think we know our trees, yet the mental image we have of them is often quite different from reality. If you want to recreate a tree species, observe it with care. Find pictures of the tree at different ages. Winter time is when a tree’s branching structure is best visible. Try to get your hands on a twig and model it to scale.

Get to know the ins and outs of tree growth with the Grove 3D tree growing software. Read the blog post on How Trees Grow to get into the terminology.

Content is copyright © 2014 - 2023 Wybren van Keulen, F12 / The Grove. None of the content may be duplicated or redistributed without permission. F12 is a registered company at the Chamber of Commerce Groningen - registration number 01097101.